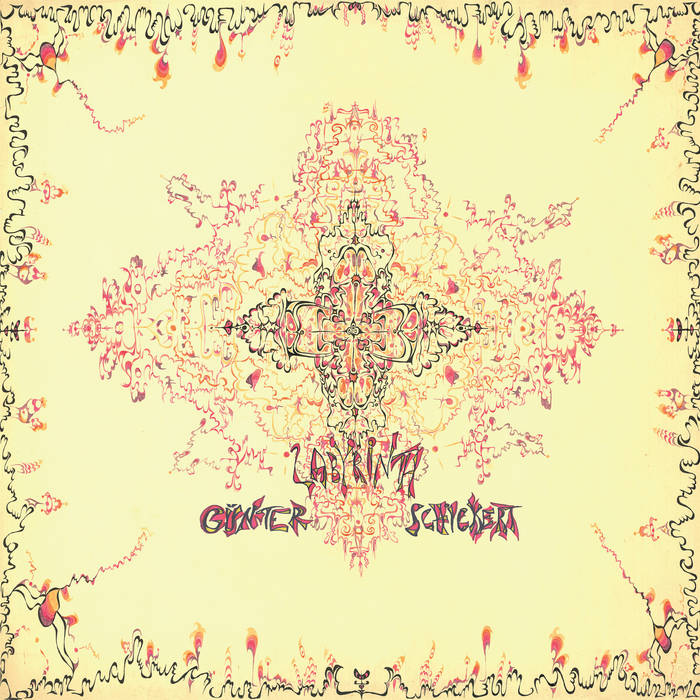 It was memorable the time when I firstly listened to his debut LP of 1974, the monumental Samtvogel. It overwhelmed me with layers of echoing guitars roaring into space, causing a powerful release of dopamine spreading through my skin, in the way an “Interstellar Overdrive”, or a Richard D James Album would do. It was a proof of the divine to
discover Günter Schickert, it is a profound honour today to present on Marmo his seventh album to date, Labyrinth, the first to be released on vinyl format since 1983`s Kinder In Der Wildnis.

Schickert´s Samtvogel, self-published first, then licensed to Brain, equaled the imaginative leap and sonic power of the early Pink Floyd, Manuel Gottsching`s Inventions For Electric Guitar or A.R. & Machines `s Die Grüne Reise. What followed, from his second LP Überfällig on Sky Records to his collaborations with Klaus Schulze, Jochen Arbeit and
Schneider TM, even if little acclaimed, spans a large spectrum of music styles, always through a distinctive and personal aesthetic, that is deeply linked to the one he firstly crafted back in `74, when Schickert pioneered the use of echo effects applied to guitar playing.

And now Labyrinth, a record that stands for versatility, where genres do not matter, soundscapes or life situations take over, song-writing emotions pop out, handing out a spectrum of surprises to the listener. You may find yourself flying low along steep cliffs and with a blink of eye you are thrown into a Middle Eastern scenery.

Side A features a selection of tracks recorded in 1996, appearing on the 2012 album HaHeHiHo, released via Pittsburgh based VCO Recordings, on a limited press of 100 units, tape format only. I felt that the visionary and emotional richness of these pieces deserved the vinyl format and a chance to reach to a wider audience.

The Raga-inspired “Morning” opens Labyrinth with exotic charm and bitter-sweet nostalgia. “Sieben” kicks off with the same guitar scales of the previous theme, before the motorised progressions of a Korg MS-20 synth surprisingly storm in, carrying along an intersecting multitude of filters and sharp guitar effects, flowing into an epic, paradisiac ending.
“Ninja Schwert” remains on astral dimensions, it is a struggle of cosmic forces, where the steady ride of a pounding beat gets embraced by different guitar layers and analogue electronic filtering. The side closes up with “HaHeHiHo”, a slow ballad featuring Mr. Schickert on vocals, guitar, bass guitar and drum machine - an example of simple, stripped
down yet gifted songwriting that is capable to reach the heart of the listener.

Side B contains material produced between 2007 and today. The intricate, bewildering “Tsunami” shows the multiinstrumental and recording abilities of Günter Schickert: a field-recorded storm with mesmerising powers, a peculiar progressive approach to guitar playing. Mysterious sinister spirits and sounds are emerging and the feeling of being in a pleasant trance arises. In contrast, “Oase” muffles the intensity and jumps into a completely different soundscape, where in liaison with the sounds of a rolling drum tom and a desert-like trumpet, the microphone carefully captures the found sound tones of everyday-life objects and actions. Like “HaHeHiHo“ on side A, “Checking” represents the vocal
gem of the B side, in a raw and direct way of songwriting like if Syd Barrett was his invisible helper. “Palaver” (which means “unnecessarily talk” in German) assembles different vocal recordings of Schickert into a bizarre free-style conversation through a mysterious language, where he attempts to emulate illiterate children conversating. The final track, “Morning (Slide)”, reprises the opening theme, this time solely performed through the caressing dilated sounds of Günter`s slide guitar.

Tracks on side A and ”Morning (Slide)” written & recorded by Günter Schickert in 1996, at Hab Sonne Im Herzen Studio, Berlin. Previously released on a cassette, ltd edition of 100 pieces, by VCO Records in 2012.

"Tsunami" written and recorded by Günter Schickert in 2017. Edited & mixed by Dirk Dresselhaus at ZONE, Berlin.

Bandcamp Daily  your guide to the world of Bandcamp